A teenage girl has died after a school minibus was involved in a major crash with a lorry on a busy road near Birmingham.

She was pronounced dead at the scene from head injuries after the bus carrying a number of Year nine and 12 students crashed.

West Midlands Ambulance Service said there were 26 patients following the incident at 9am on the A38 Kingsbury Road in Staffordshire.

Pictures from the scene showed the small minibus and a bin lorry inside the police cordon. 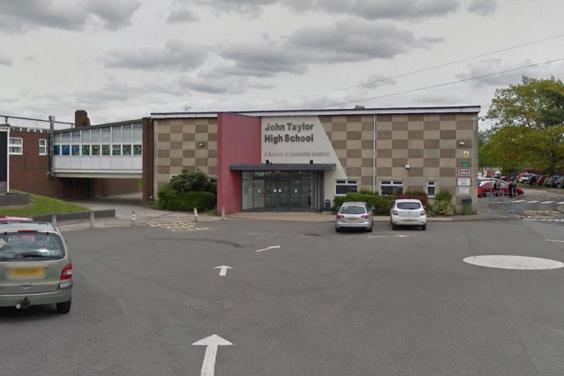 The children are pupils at John Taylor High School (Google)

A West Midlands Ambulance Service spokesman said: “Crews arrived on scene to discover a collision between a minibus and a lorry.

“There were 25 patients, from the minibus. One of whom, a teenage girl, had suffered serious injuries in the collision and unfortunately it immediately became apparent that nothing could be done to save her and she was confirmed dead at the scene.

“A second teenage girl received treatment at the scene for minor injuries and was transported to Heartlands Hospital for further assessment.

A further 19 children were discharged at the scene, as well as four adults.

The lorry driver was uninjured and, along with the minibus driver, is assisting the police investigation.

Superintendent Dean Hatton, head of the Central Motorway Police Group, said: “This is a tragic incident which has resulted in the death of a pupil from the John Taylor High School in Barton-under-Needwood.

“The family of the teenage girl has been informed and they are being supported by officers from our family liaison unit.

“We are also in contact with the school and our colleagues at Staffordshire Police, who are understandably devastated as this occurred while their students were on a school trip.”

Passer-by Alex Jeffers, 19, told the Birmingham Mail he heard a bang as he was crossing the road.

“I turned around and I saw a lot of dust go up in the air and a lot of glass shattered and metal from the lorry on the roadway by the bus stop,” he said.

“Both the lorry and the minibus came to a stop. I went over to the minibus to see if there was anything I could do.”

Machine worker Stephen Jones, 38, who works nearby, said: “I heard a big bang at 9am this morning – a massive bang.

“I came over and had a look and the police were here with the sirens and they’d shut it all.

“I saw the coroner’s ambulance and I heard a girl had passed away.”

He added: “There are a lot of accidents here all the time, it’s a busy road.”

John Taylor High School, in Staffordshire, said in its statement: “Please be aware that a number of our year nine and year 12 students that are on an art trip have been involved in a serious road traffic accident this morning.

“We are working to support those directly affected. Please support us by not ringing into school as this closes our lines.”

Local MP Jack Dromey tweeted: “I am shocked to hear of a serious accident on the Kingsbury Road. Our thoughts and prayers are with those involved.”