This is the terrifying moment a masked thug lunges at a driver in a parked car with a large knife in east London.

The 20-year-old victim had parked up his black Ford car in the Isle of Dogs on Wednesday night when he was approached by three men on bicycles who allegedly smashed one of the vehicle’s windows.

One of the men, who wore a white T-shirt, shorts and a balaclava, repeatedly tried to stab him from behind before fleeing the scene.

Video shows the man approach the vehicle in Cuba Street before lunging at the driver several times with the blade at about 9pm. 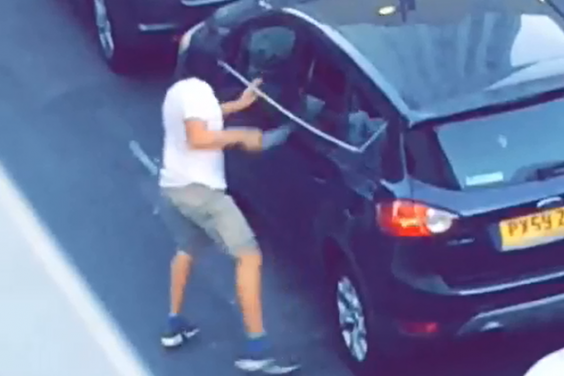 Isle of Dogs: The horrifying moment a masked knifeman lunges at a young driver in parked car

The victim received minor cuts to his hand and arm, while the passenger in the car, also 20, suffered a scratch to his arm, police said.

A Metropolitan Police spokesman said: “Detectives in Tower Hamlets are investigating an attempted GBH in Cuba Street, the Isle of Dogs at about 9pm on Wednesday, July 5.

“The injuries are not life-changing or threatening. Enquiries continue.”