The relative of two Grenfell Tower victims has spoken of her heartbreak after a “happy place” became a “war zone” on the night of the tragic blaze.

Family and friends of five of those killed in the fire, including two child victims, gathered to remember their loved ones on Thursday.

The Archbishop of York, Dr John Sentamu, joined a congregation in north Kensington, a little more than half a mile from the scene of the disaster six weeks ago.

Adelaide Mendy, cousin of artist Khadija Saye and niece of Ms Saye’s mother, Mary Mendy, said Grenfell Tower had been a place of joy and happy memories for her before the destruction and terror caused by the fire. 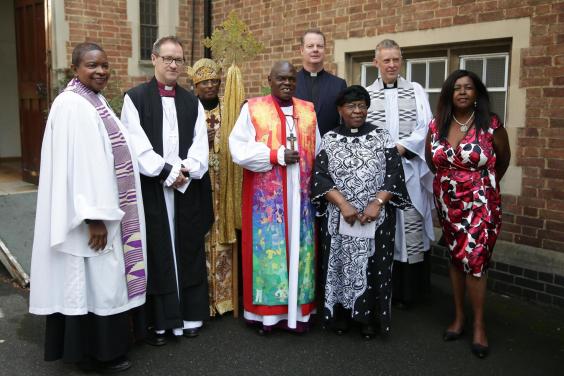 She said: “The flats where families got together for parties and where social gatherings were held.

“A place where love was given and received, where endless joy was felt.

“With the silent voices that will never be heard.”

She recalled the fear and panic on the night of the fire, and her desperate hope that her relatives would not be caught up in it.

She told those gathered: “I felt an excruciating and an almost unbearable pain.

“I felt powerless at the thought that there was nothing else that I could’ve done.”

She paid tribute to her cousin and aunt, saying Ms Saye’s love for art and her work had “inspired people to do better and make a difference”.

A tribute read on behalf of David Lammy MP, a family friend, recalled the pair as “two beautiful souls”.

Another cousin, Ambrose Mendy, gave a passionate speech in which he described the disaster as “a disgrace” and “disgusting”.

He said: “People’s lives have been taken away from them, generations of hope, homes which people have invested their life in, are gone.

“This tall coffin in the air, is perhaps the best way to describe it. What’s going to happen to it? How long is it going to remain there as a timely reminder of man’s inhumanity to man?”

The lives of Ms Saye, Mary Mendy, Berkti Haftom and her 12-year-old son Beruk, as well as five-year-old Isaac Paulos were being celebrated at the ecumenical service in St Helen’s Church.

A devastating fire ripped through Grenfell Tower, a 24-storey block of flats in west London, on June 14, killing at least 80 people.

Thursday’s service opened with a recording of Michael Jackson’s Heal The World, and the Gospel For Grenfell choir later sang a number of well-known songs including Something Inside So Strong.