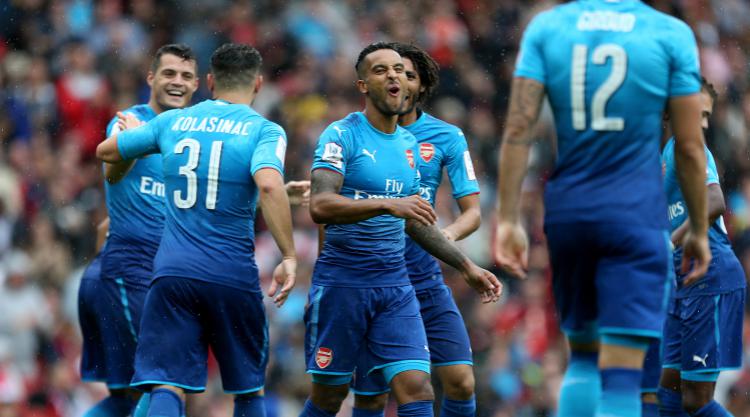 Theo Walcott hit a brace for Arsenal to help see off Benfica in the Emirates Cup and send a timely reminder to manager Arsene Wenger.

Having fallen behind to Franco Cervi’s strike, Walcott scored twice before a Lisandro Lopez own goal and efforts from Olivier Giroud and Alex Iwobi sealed a 5-2 win for the hosts.

The England forward said during pre-season that he welcomes the added competition up front following the arrival of club record signing Alexandre Lacazette.

In reality, the purchase of the France international means Walcott’s chances of playing as the Gunners’ out and out striker are severely reduced.

But he scored twice playing in a deeper role and, with the future of talisman Alexis Sanchez still up for debate, Walcott will have enjoyed taking centre-stage.

Benfica led when Jonas headed back to Cervi, whose low shot ricocheted off the feet of Per Mertesacker and beat David Ospina to open the scoring.

Arsenal were soon level with a goal that owed a lot to new recruit Sead Kolasinac. The free signing from Schalke won the ball on the touchline and lofted a perfect pass for Walcott to finish comfortably past former QPR goalkeeper Julio Cesar.

Kolasinac was again involved in Walcott’s second, rolling a pass to Francis Coquelin who then cut the ball in for the England forward to sweep home.

Benfica levelled courtesy of Salvio, whose shot hit Rob Holding on its way past Ospina.

Arsenal were back in front early in the second half as Benfica substitute Lisandro turned Walcott’s cross into his own goal.

Now fully in control, Iwobi hammered home the fifth after Kolasinac and Giroud combined to set him up.

Lacazette was given a rousing reception as he replaced Walcott for the final 15 minutes but the game petered out following a string of changes as Arsenal secured a comfortable victory.