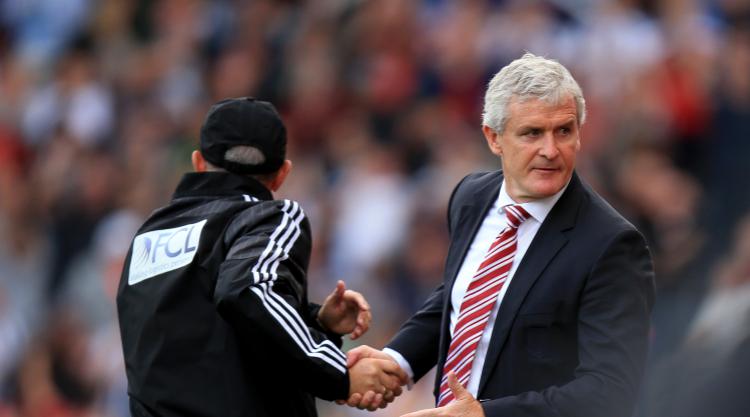 Tony Pulis and Mark Hughes appear to have let bygones be bygones ahead of Sunday’s Premier League clash between West Brom and Stoke at the The Hawthorns.

Years of acrimony looks to have been put to bed after both told the same story in their pre-match press conferences this week of a handshake at a Premier League managers’ meeting.

“Everything is fine,” insisted Pulis. “There’s no problem,” said Hughes.

The hostility began in 2010 when Hughes refused to shake Pulis’ hand, when the pair were in charge of Fulham and Stoke respectively, because he felt a challenge on Mousa Dembele was too robust.

Pulis then refused to shake Hughes hand in retaliation the next time they faced each other, before succeeding Hughes as Stoke boss three years later.

Saido Berahino’s transfer from West Brom to Stoke fuelled the fire further earlier this year, with conflicting reports over whether Stoke had been informed of the striker’s drugs ban. And this summer, Hughes managed to prise Darren Fletcher away from The Hawthorns.

“I think the media and press would like to make it more than it is and I understand you have to do your job, but everything is fine,” said Pulis.

Added to the mix is the fact that the two clubs are now nearest rivals from a geographical point of view.

“That’s because we’ve lost the other clubs around us,” said Pulis. “Stoke and Leicester have become our local derby games. Unfortunately, although our supporters will say fortunately, Birmingham, Wolves and Villa are all playing in the Championship.”

On Fletcher making his first return to The Hawthorns following his move to Stoke, Pulis said of his former captain: “He should get a great reception because he’s been absolutely fantastic for this football club.

“He’s a wonderful person and what he did here on and off the pitch was first class. He missed one game in two and a half years.

“Anybody who’s been involved with Darren Fletcher will tell you what a great person and human being he is. I’ll be really disappointed if he got anything but applause.”

Jonny Evans remains an injury doubt for West Brom ahead of the match. Evans, a transfer target for Manchester City, has yet to feature this season because of a hamstring problem and he will continue to be assessed. Fellow centre-half Gareth McAuley (thigh) remains out and striker Hal Robson-Kanu is still suspended.

James Morrison will also be checked on after making his return from injury at Accrington in midweek but the midfielder is expected to be in contention. New signing Oliver Burke could be among the substitutes.