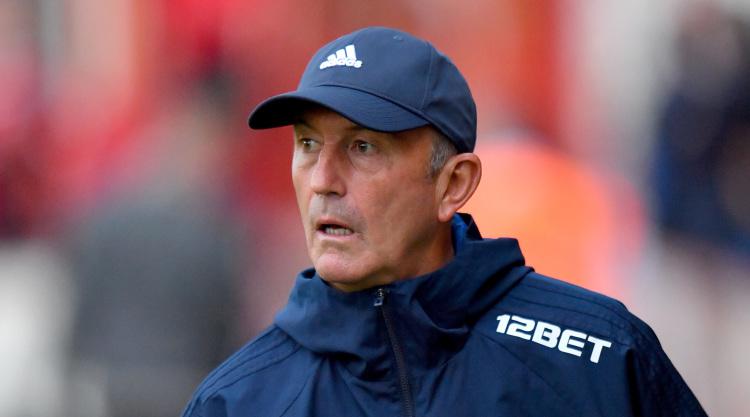 Tony Pulis repeated his call for more signings after West Brom eased past Accrington to reach the third round of the Carabao Cup.

Pulis sent out a strong side against the League Two outfit and was rewarded with a 3-1 victory, courtesy of goals from Salomon Rondon, Matt Phillips and Jay Rodriguez, the latter netting his first for the club.

But he did not put his team selection down to a desire for momentum after starting the season with back-to-back wins over Bournemouth and Burnley, nor to a fear of repeating last year’s ignominious exit at the hands of Northampton.

Instead, he cited a threadbare senior squad which left him short of options for rotation and eagerly eyeing the remaining week and a half of transfer activity.

“It’s the only team we’ve got,” he said of a team-sheet showing just four changes.

“If you look at it we’ve only got (Gareth) McAuley injured and back at the ground and Hal (Robson-Kanu) who’s suspended. People around this club, including the chairman, know we need to get some players in. We’ve got 10 days to do it but we really need to fill quite a few areas of the squad to compete in the Premier League.

“We’ve got to start doing some business and I’m hoping it’s not frantic, I’m hoping to get them in before the weekend.”

In mentioning the absent pair of McAuley and Robson-Kanu, Pulis seemingly overlooked Jonny Evans. The central defender is currently absent with a hamstring problem but has attracted serious interest from Manchester City, who could yet return for the Northern Ireland international before the end of the window.

Albion are not minded to sell having recently appointed the 29-year-old captain but Pulis was keeping any developments close to his chest.

Pulis was more forthcoming about the picture that faced his Premier League stars after they left the field at the Wham Stadium, which attracted 2,699 fans split roughly evenly between the teams.

Stanley are riding relatively high after winning two of their first three league games but their infrastructure is still a work in progress and at least one possible cup run has now hit a dead end.

“We put a shift in at a ground where we could easily have slipped up,” said Pulis.

“It’s so far away from the Premier League experiences they have every week. The showers couldn’t be turned on afterwards because the lights had to go off. Fantastic. I love all that.

“I was brought up in my managerial career with cold showers dripping afterwards. These kind of games won’t do this lot any harm.”

Stanley boss John Coleman, whose side got a deserved consolation through Tom Dallison in the 88th minute, bemoaned a misdirected header from Jonny Edwards in the first half as well as the referee’s take on events in the West Brom box.

“Jonny’s miss was a sitter, he knows it’s a sitter, but he doesn’t mean to do it,” he said.

“They’re the turning points.that and two penalty shouts at 2-0. If you get the rub of the green it’s a different game. Playing no differently we could have won the game.”