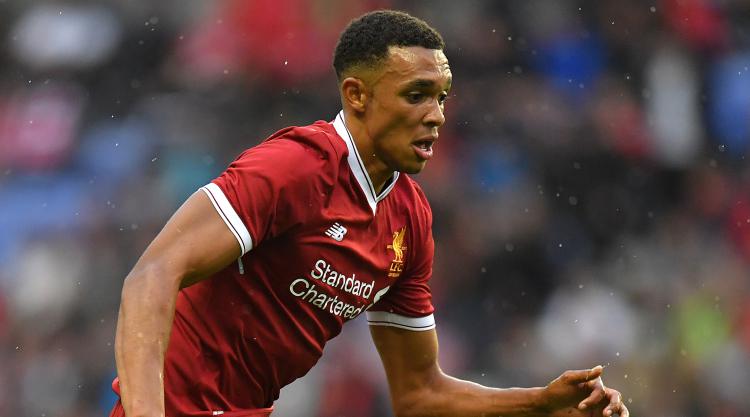 Liverpool manager Jurgen Klopp praised the character of Trent Alexander-Arnold after the teenager scored a brilliant free-kick in their 2-1 Champions League play-off win over Hoffenheim.

The 18-year-old stepped up ahead of more senior colleagues to whip in a set-piece and open the scoring with his first goal for the club on his European debut.

Hoffenheim’s late strike from Mark Uth came from Alexander-Arnold’s side of defence after James Milner’s cross had deflected in off Havard Nordtveit to make it 2-0, but Klopp accepts the youngster is still learning and was more interested in what he can do rather than what he cannot.

“I have to say, for an 18-year-old to have the balls to kick a free-kick is better than the mistake,” he said.

“He is an incredible young player. It was actually because I told him he had to do it – he was the only one who can. He can shoot free-kicks better than I ever could.

“I told him because I watched him many times for the Under-23s last season and he took the free-kicks – and the goal is the same size.

‘There is a big challenge after training for free-kicks between him and Ben Woodburn (the club’s youngest scorer, who does not turn 18 until October).

“It helps the manager tells him (to take it). It was very important and very good for us.”

Alexander-Arnold admitted his European debut could not have gone any better.

“It is a thing of dreams to make your European debut for your boyhood club,” he told BT Sport.

“Especially to make it with a goal was very special for me. More importantly, we got the win.

“I kind of got egged on to take the free-kick, to be honest. I never put my hand up first but I had the confidence to take it and it paid off.”

Despite conceding a late goal, Klopp insists he was happy with the scoreline to take back to Anfield for next week’s second leg.

“If somebody told me we would win tonight we would take each result – even an 8-7 – and so I am happy about the result,” he added.

“No I’m not happy with the goal they scored but I think they deserved the goal for their effort over the 90 minutes.

“Yes they had their moments, especially when they changed a little bit their style of play. But we were very offensive on both wings and that left Trent and Alberto (Moreno) alone.”

“I saw the penalty and I thought it was offside. Simon again with John Achterberg (goalkeeping coach) did a really good job,” Klopp said.

“It was a decisive moment of course, it gave us a boost and a blow for the other team.”

Hoffenheim coach Julian Naglesmann felt his side were unfortunate to lose.

“I feel we played a really good match, especially in the first half and had the better, clearer chances,” he said.

“We had two good chances with (Serge) Gnabry and the penalty, which was a bit unlucky.

“We didn’t allow loads of counter-attacks and then came the free-kick – and that was unlucky for us.

“The second goal Milner let himself celebrate but the shot was deflected so it was unlucky.

“We weren’t the worst team today but the least lucky.”