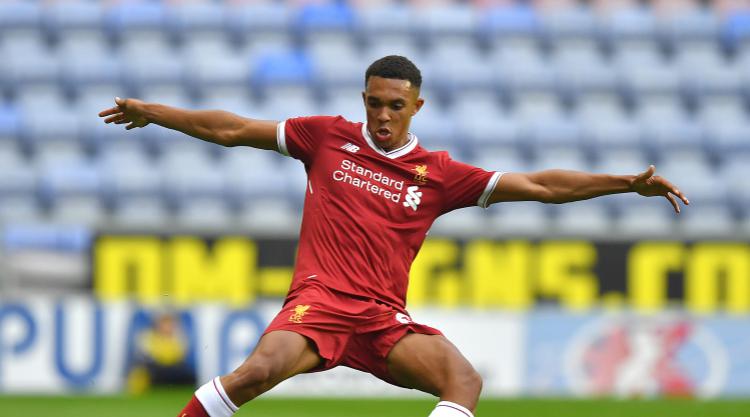 Liverpool academy graduate Trent Alexander-Arnold is hoping to live up to Steven Gerrard’s expectations after scoring a brilliant maiden goal on his European debut.

In April the Reds’ former captain, speaking after officially taking charge of the club’s under-18 side, sang the praises of the teenager.

“Trent’s going to be a beauty,” was Gerrard’s assessment of his fellow Liverpudlian.

Alexander-Arnold announced himself on the European stage with a dipping free-kick over the wall to give Liverpool the lead on their way to a 2-1 victory over Hoffenheim in their Champions League play-off first leg.

On being reminded of Gerrard’s comment the 18-year-old said: “It’s always good to get compliments from your idol and I am hoping to live up to his words.

“It is always good to have his backing and support.”

The young defender has seen himself elevated to one of a handful of set-piece takers after impressing manager Jurgen Klopp with his dead-ball prowess.

Having been waved on by more senior colleagues Alberto Moreno and Emre Can he repaid his manager’s faith in him with a vital strike.

“I’ve been practising free-kicks but I didn’t think the senior players would let me take it to be honest but in the end they did and I stepped up and scored and did well for the team,” he added.

“It is indescribable to be honest. Special in so many different ways for me personally and I’ve definitely ticked the box off.

“At first I didn’t know it was going to go in but it was well placed and I thought it was a good free-kick and I was happy it went in.”

Alexander-Arnold’s progress has been rapid and after just 14 appearances he is pushing England international Nathaniel Clyne, currently out injured, to be first-choice right-back.

He is determined to keep his feet on the ground, however.

“I don’t tend to think about it. I just try to go to Melwood every day and try to fight for my position for the weekend and that’s what I’ll be doing on Wednesday because you can’t take for granted you are going to play again and you have to try to keep your spot and that is what I am trying to go and do this week,” the defender said.

Conceding a late goal has left the tie finely balanced for next week’s return leg at Anfield and Alexander-Arnold knows they will have to be wary of Germany opponents who play a similar high-tempo pressing game.

“It is a bit sickening we conceded so late on but we can’t let that affect us as we still have another 90 minutes to play at Anfield and we go there a goal up,” he added.

“We can’t take anything for granted because they are really good opposition and anything can happen especially in European games. We have to go with a game plan and look to finish it off and get into the group stages.”