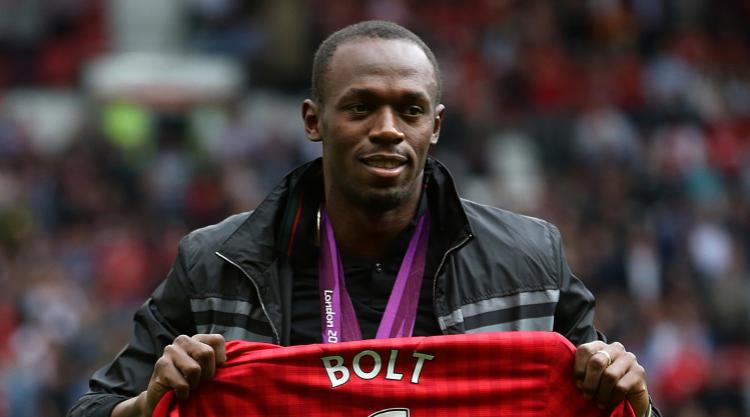 Usain Bolt will be prevented from achieving his lifelong dream of playing for Manchester United by the hamstring injury sustained in his farewell race.

United Legends take on their Barcelona counterparts at Old Trafford on September 2 in a charity match, raising money for the Manchester United Foundation and its work in the local community.

Ruud van Nistelrooy, Denis Irwin and Dwight Yorke are among those signed up for the Bryan Robson-managed Red Devils, who had hoped to be able to call upon the fastest man in history.

Bolt has long dreamed of playing at Old Trafford and was finally set to get that chance if he was able to overcome the hamstring injury sustained at the World Championships in his final race.

However, the retired sprinter will not be able to line up for the Legends following a scan on the injury sustained in Saturday’s 4×100 metres relay.

Bolt has long been keen to play for United Legends, whose previous matches against Real Madrid and Bayern Munich raised more than £1.8million for the Manchester United Foundation.

He tweeted: “Sadly I have Tear of the proximal myotendineous junction of biceps femoris in my left hamstring with partial retraction. 3 months rehab”

Bolt refuted any suggestion he had not truly been injured at the World Championships.

He added: “I don’t usually release my medical report to the public but sadly I have sat and listened to people questioning if I was really injured.

“I have never been one to cheat my fans in anyway & my entire desire at the championship was run one last time for my fans.

“Thanks for the continued support my fans and I rest, heal and move onto the next chapter of my life #Love&LoveAlone.”

Competitions have previously got in the way of Bolt making an appearance for United teams in such exhibition matches, but there is scope for the Jamaican to be involved at another point.

Bolt’s love of football is well known, as is his fondness for United.

The Jamaican sprint great has been to Old Trafford on several occasions and last December went as far as to call into MUTV’s phone-in show to praise Jose Mourinho’s men.

Bolt has been “mind bent on playing for Manchester United” since his first visit in 2009 and has spoken with no little self-belief of his ability as a footballer.

“I think I would be pretty good because I am fit, I am quick, I can control the ball and I understand all of the play.

“So, I think if I do a trial then they would say, ‘You know what, here is a contract for five years!’.