A cyclist was today critically injured after being struck by a lorry on a busy junction outside Victoria Station.

The man in his 50s was treated at the scene for “possible life threatening” injuries and was taken to a Central London hospital. The eight wheel lorry stopped at the scene.

The crash happened at the junction of Victoria Street and Buckingham Palace Road at around 11.15am today.

A large cordon remains in place near the Grosvenor Gardens entrance to Victoria Station. 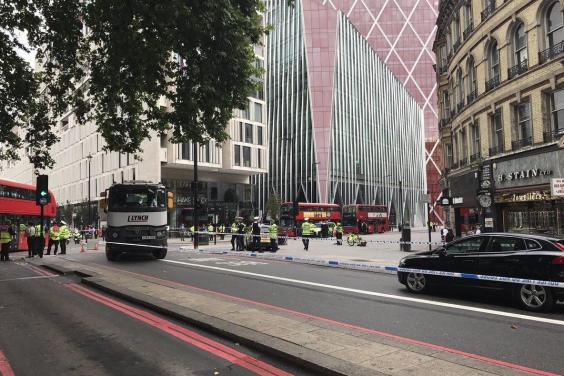 Cordon: the aftermath of the crash in Victoria (Twitter/@Tash_Salmon)

Police said the lorry driver has not been arrested.

A spokesman said: “Police were called at 11:13am on Tuesday to reports of a road traffic collision in Buckingham Palace Road.

“Officers, the London Ambulance Service and London’s Air Ambulance attended and found a male cyclist in collision with a lorry.

“The man, aged in his 50s, has been taken to a central hospital with possible life-threatening injuries.

“The lorry driver stopped at the scene.

“Road closures are in place.

“No arrests have been made.”