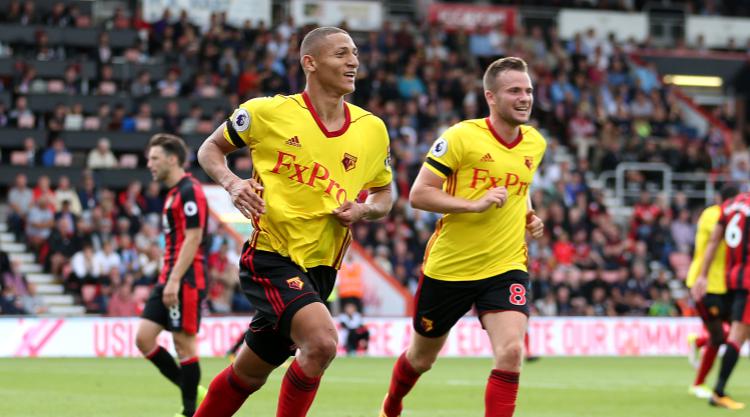 Nathaniel Chalobah had wasted a series of chances for the Hornets but they were not to be denied the three points as Richarlison poked in his first goal for the club 17 minutes from time before Capoue drove in a splendid half-volley from distance late on.

The match marked Jermain Defoe’s first home game back at Bournemouth but, after coming on half an hour from time with the score level, he failed to inspire Eddie Howe’s men.

The visitors perhaps could have had a penalty inside five minutes when Tom Cleverley’s close-range effort appeared to be blocked by the outstretched arms of former Watford defender Nathan Ake following Jose Holebas’ long throw from the left.

Cleverley’s appeals were waved away by referee Roger East before Bournemouth had their first big chance of the game moments later.

Joshua King played in Ryan Fraser on the left and, after his low, deflected effort was repelled by Hornets goalkeeper Heurelho Gomes, Benik Afobe blazed over the rebound while under pressure from Miguel Britos.

Chalobah should have put Watford in front in the 18th minute but he directed a free header wide of the left upright following Nordin Amrabat’s superb right-wing delivery.

Bournemouth had another lucky escape just before the half hour mark when defender Steve Cook took out Richarlison with the Watford man racing towards goal, only to be saved by a debatable offside decision.

Richarlison was causing Adam Smith plenty of the problems on the left wing. Having earlier beaten him with a sublime piece of skill, he carved out a golden chance for Andre Gray in first-half injury time but the Hornets’ record signing fired high over the angle from just a few yards out.

Bournemouth centre-back Cook saw a header from a corner saved on the goal-line by Gomes early in the second period, before Watford midfielder Chalobah squandered two excellent opportunities.

The former Chelsea man inexplicably opted to dummy a cut-back from Amrabat with no team-mate behind him, before taking too long to finish and being denied by Cherries keeper Asmir Begovic after seizing on a slip from Cook and going clean through.

Bournemouth boss Howe clearly sensed his side were struggling and he threw on England striker Defoe with half an hour remaining, in place of the luckless Afobe.

The substitution failed to pay dividends though and Watford’s second-half superiority was rewarded when Richarlison poked them ahead with his first goal since a summer switch from Fluminense.

Watford boss Marco Silva won his first game as Hull manager against Bournemouth and he repeated the trick here as Frenchman Capoue put the result beyond doubt.

The midfielder collected the ball 25 yards from goal four minutes from time and unleashed a fantastic strike into the bottom left corner as Watford ended a run of four successive top-flight draws against the Cherries.