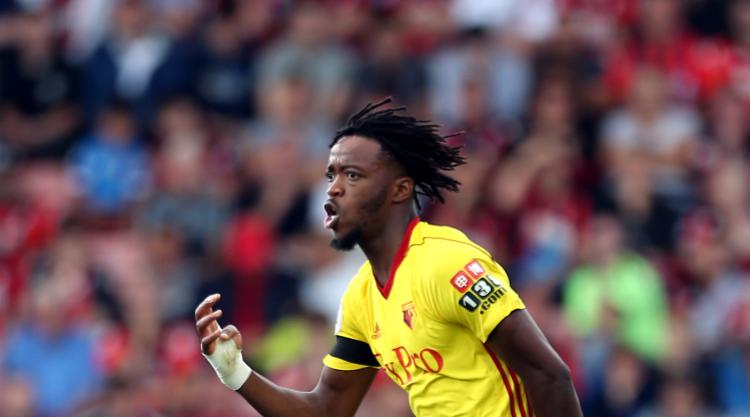 Watford’s Nathaniel Chalobah received the right kind of call on Thursday after being included in Gareth Southgate’s England squad for the first time.

Just days after being on the end of a rogue on-pitch call from Bournemouth’s Harry Arter, the former Chelsea youngster could be in line for his senior Three Lions bow.

Chalobah, 22, has just three Premier League starts to his name – two of which came this season since joining the Hornets in the summer.

A clip of the midfielder leaving a cross following a call from Arter, who impersonated a Watford team-mate and shouted at Chalobah to leave the ball, took social media by storm.

Marco Silva’s Watford went on to win the contest at the Vitality Stadium and the Portuguese is pleased to see Chalobah make the step up having discussed the incident with the player.

“Firstly congratulations to him,” he said.

“Of course it is very good for us as a club, firstly for the boy. It is a target he has in his mind for his career and is fantastic if he achieves this.

“If he goes he will work there like he does every day here, he is a wonderful boy and he has worked for it.

“You can talk about everything but after, when things happen on the pitch, it is easier to learn. He is a footballer, it is not something new and I’m sure it is not the last time it will happen.

“I spoke with him, with everybody, about situations that can happen in a match.”

Watford host newly-promoted Brighton on Saturday and expect to have Benfica winger Andre Carrillo available to make his debut.

Press Association Sport understands the 26-year-old is closing in on a loan move to Vicarage Road and is in London sorting out his visa.

Carrillo worked under Silva at Sporting Lisbon and is set to become the ninth summer arrival at Watford.

Their business is unlikely to be completed however as Silva remains in the market for a left-back, a position where he only has Jose Holebas as a first-team option.

Holebas is banned for the visit of the Seagulls after being sent off in Tuesday’s Carabao Cup defeat to Bristol City.

Silva admits he has a decision to make on whether to play 19-year-old Brandon Mason on Saturday or convert another player to fill the left-back role, as the continued links with Arsenal’s Kieran Gibbs have not yet materialised into a move.

“It is true,” he said when asked if he had an issue at left-back.

“It is not the first big problem we had as if you remember the match against Liverpool we had the injuries to Daryl Janmaat, Roberto Pereyra and Younes Kaboul.

“We saw the problems in the week again and now of course it is easy for you to understand. We have Mason, the young boy, but we have no proper left-back and we need to find a solution.

“I have an idea in my mind, we have a session on Friday to work and after that I will make my decision. If it is Mason or the other player I adapt in that position, they will 100 per cent do a good match.”