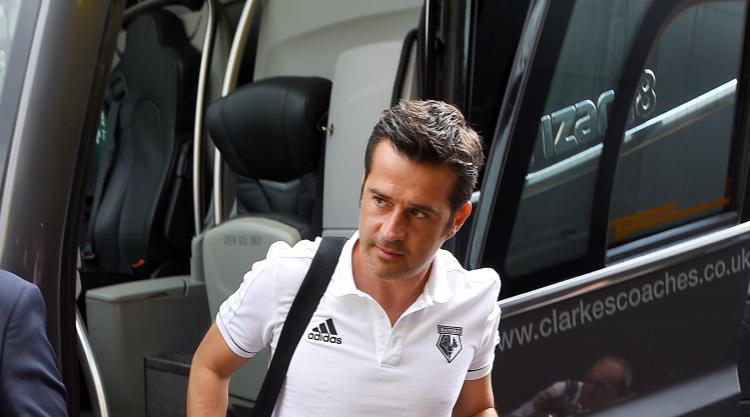 Watford head coach Marco Silva is still looking to do plenty of business in the coming weeks even though he believes the transfer window should be closed before the season starts.

The 40-year-old enjoyed a memorable start to his Vicarage Road reign as his side scored a dramatic late equaliser to draw 3-3 with Liverpool on the opening weekend of the campaign.

The Hornets have been one of the busiest top-flight clubs so far this summer, signing eight new faces and moving on seven either on loan or permanently.

Premier League clubs are reportedly pushing for the transfer window to be shut before the start of the season.

Shortening the window would been seen as a way of removing a lot of uncertainty over the futures of players as speculation over the likes of Ross Barkley, Philippe Coutinho, Virgil van Dijk and Alexis Sanchez rumbles on despite the new campaign being under way.

Silva, as well as a number of his Premier League counterparts, is keen to see the window close before a ball is kicked.

“For me the best solution is to finish everything before the season starts,” he said.

“It’s really important because after we start the season. It’s not the best scenario, I’d look to stop before the season.”

While the former Hull boss is keen to see the rules altered, he is fully prepared to work on transfers, both into and out of the club, right up until the current deadline of August 31.

“The owner knows what we want, what we believe is the best solution for the squad, we expect to finalise some of them before August 31,” he said.

“This is what I expect. Our board will work hard to sign the players we want.”

Pushed on if any players would be sold, Silva added: “Yes, depending on what we will do until the end of the market and of course I will start to take my decisions in the next week.

“Of course we have worked close to the 25-26 players. I will need to take my decision.”

Silva started with club-record signing Andre Gray on the bench for the draw with Liverpool as the ex-Burnley forward had trained just twice with his new team-mates before the game.

Most of Silva’s squad are in a position where they must adjust to what a new manager asks of them, a familiar situation at Watford who have now had six managers in the last three years – another scenario Silva admits is unhelpful.

“For me I know what I want for my teams,” he added.

“If you ask me what the better solution is, if you work one, two years you start to do everything new and then do the same again next year it is not the best way.

“I know what is important is this moment is to look forward and try and do good things and make sure the same situation does not happen again.”

Silva takes his side to Bournemouth on Saturday looking to build on the draw with Liverpool and with skipper Troy Deeney pushing to be involved having returned to training following groin surgery.

While Deeney’s potential return is good news, Silva will be without Daryl Janmaat, Roberto Pereyra and Younes Kaboul – who all suffered muscular injuries during the Liverpool game.