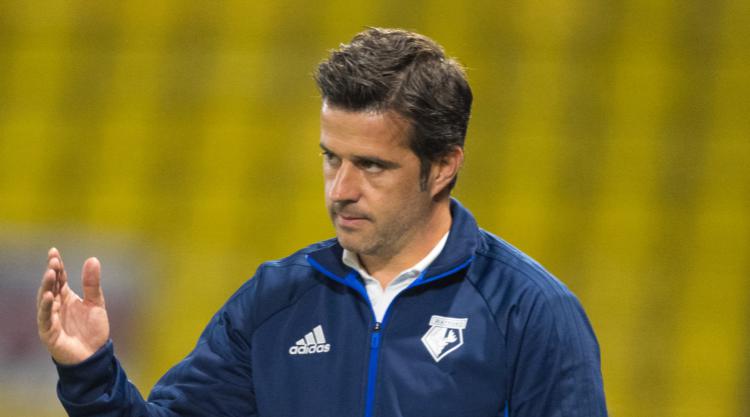 Given the Hornets’ solid start to life under the Portuguese and the Championship visitors’ nine changes, few would have predicted the unfancied Robins emerging victorious at Vicarage Road.

A dire opening period was forgotten when Etienne Capoue put Watford ahead early in the second half, with City soon hitting back through 18-year-old Freddie Hinds and substitute Bobby Reid.

Watford left-back Jose Holebas saw red before City’s Niclas Eliasson scored as matters were compounded for the hosts, whose fans had headed for the exit by the time Adrian Mariappa scored a consolation late in the 3-2 defeat.

“Bad night – a really bad result for us, a disappointing result,” head coach Silva said of his first loss at the Watford helm.

“Of course we prepared for the match to win and we knew what we needed to do to win, but we didn’t do it.

“We controlled the match, we don’t give a lot of solutions for our opponents to make problems for us but we need to do something different in our fast decisions, in our counter attack as well, to create more chances to finish.

“We didn’t do that during the first half. We changed some things at half-time, even the positions of our three midfielders.

“We started well, not only because we scored the goal but because we played different, played a little bit faster.

“And after the goal we came back again for the same style: too slow, everything too slow, we start to lose easy balls, to give our opponent some dangerous counter-attacks with their fast attack.

“Of course in two moments we lose our balance in two counter-attacks, they score two goals and after everything is more different for us and we start to play a different way like I don’t like, really.

Silva’s emotions contrasted markedly with those at Bristol City after the Championship side secured a memorable cup upset despite making nine alterations.

Robins assistant Dean Holden is hoping for a third-round draw at Manchester United after an impressive all-round display from his much-changed side.

“Coming to the home of a Premiership opposition, it is going to be tough for any team,” Lee Johnson’s assistant said.

“We had some young players in the team, like Lloyd Kelly making his debut.

“I think the most pleasing thing is when we conceded that goal so early in the second half we managed to maintain our belief.

“We wanted to get back to our way of paying tonight and certainly that second half performance gave us a lot of confidence because we kept getting on the ball, we moved it well, we scored three great goals.

“Freddie Hinds has again got himself a great goal, as he did in the first round against Plymouth.

“It was a very, very pleasing performance, we managed to rest some players and still get a result, so the lads that have come into the team have given us food for thought and that’s exactly what we wanted.”