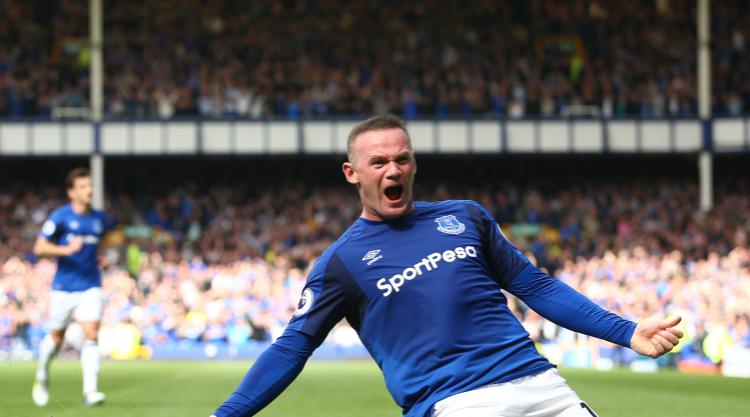 After 13 record-breaking years at Manchester United, the 31-year-old made the ideal mark on his Premier League homecoming.

Rooney’s header late in the first half – his first competitive goal for the club in 4,869 days – broke the deadlock and set Ronald Koeman’s Everton on course for a 1-0 win against Stoke at Goodison Park.

The forward’s name was cheered the loudest before a surprisingly lethargic first half got under way, with a lacklustre opening period eventually sparking into life in stoppage time.

Everton improved after the break but issues with fluidity and cohesion remained for Koeman’s new-look side, with Jordan Pickford forced into an outstanding save to deny Xherdan Shaqiri a last-gasp Stoke equaliser.

Both sides made a tentative start as they deployed three-man defences, with forward Mame Biram Diouf playing as a remodelled right wing-back for the Potters.

That move, honed in pre-season, nearly paid dividends as Everton new boy Pickford had to tip his early cross around the post, with former Liverpool midfielder Joe Allen then having attempts blocked as the hosts stuttered.

Sandro Ramirez’s dragged attempt wide was the best Koeman’s men could muster in an opening 20 minutes characterised by misplaced passing and disjointed thinking.

Idrissa Gana Gueye nearly saw a drive directed in by Rooney as Butland was belatedly tested, before the livewire midfielder missed with another attempt from similar range.

The match soon drifted again, though, as the surprising lack of tempo continued – only for the first moment of fluidity to bring a dream stoppage-time opener.

Neat play in the middle saw the ball played wide to Calvert-Lewin. Rooney followed up his involvement in the move by running into the box, breaking free and heading the right-wing cross home to get the Goodison faithful on their feet.

It was an ideal end to a forgettable first half that Everton returned from with a four-man defence and improved attacking intent, with Calvert-Lewin denied by a late block before a hopeful Davy Klaassen attempt.

Darren Fletcher fizzed wide in a rare Stoke attack before the hosts returned to the attack, with Butland having to be alert to stop Calvert-Lewin after shrugging off debutant Kurt Zouma.

Peter Crouch and Maxim Choupo-Moting, making his first Potters appearance, were introduced as manager Mark Hughes looked for an equaliser, only to be met by stern Everton defending.

Koeman was agitated in the dugout as sloppiness allowed the visitors to press in the dying minutes, with Shaqiri forcing an outstanding one-handed save from Pickford at the death as Everton held out for victory.