School children melted the hearts of police officers with adorable notes thanking them for showing “astonishing bravery” during “horrible” terror attacks in the capital.

The heart-warming notes sent to Kingston Police praised cops for “showing their true courage” in the wake of atrocities at London Bridge and in Westminster.

Spokesman Seb Ellis said six mystery letters arrived from children, aged between six and 10, at the police station on Monday.

One message, from 10-year-old Emilia, read: “We are all very thankful that there are people like you who will always be there to help us, in all due respect.

“You have taken control in life-or-death situations, and shown true leadership.” 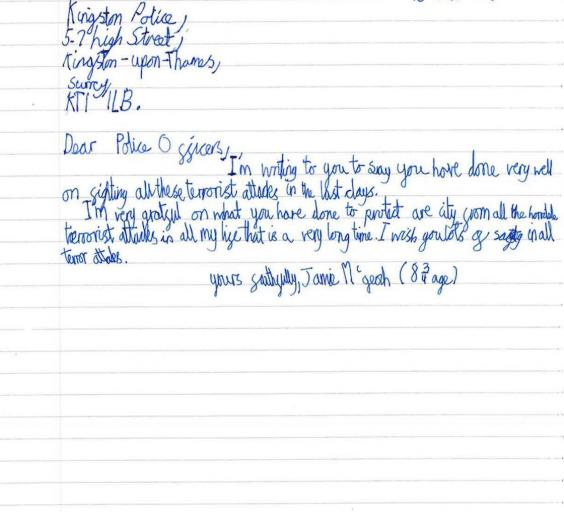 Thank you note: Police said they were ‘taken aback’ by the notes (Kingston Police)

The primary school pupil thanked officers “with all her heart, on behalf of the whole community” before adding that she hoped anyone injured in the attacks “continued to thrive in their wonderful lives”.

The intelligent youngster then added that her “thoughts and prayers were with those that lost loved ones.”

Jamie McGeoch, aged eight-and-three-quarters, wrote to officers to say they “had done very well on fighting all these terror attacks in the last days”.

Jamie added: “I’m very grateful on (sic) what you have done to protect our city from all the horrible terrorist attacks in my life – that is a very long time.

“I wish you lots of safety in the terror attacks.”

A caption, illustrated with smiley face and police car emojis, added: “Thanks Emilia and Jamie”.

Kingston Borough Commander Anthony Enoch sent each child a personal letter thanking them for their sweet notes along with police stickers.

He told Emilia: “Thank you from the bottom of my heart for taking the time to write into the police station. Your letter is beautifully worded and incredibly neat, I especially like the blue pen you have written in”.

He added that his officers have had “a very difficult few weeks” but said “recieiving letters like yours make it all worthwhile”.

Chief Superintendent Anthony Enoch told Jamie: “I appreciate your messages of safety to our officers and agree that eight-and-three-quarter years is a very long time too.” 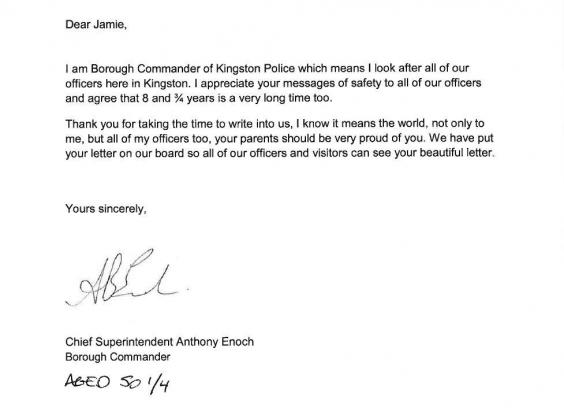 He told the pair that their letters had been displayed in the police station before signing off “Chief Superintendent Anthony Enoch, aged 50 1/4”.

Followers were quick to praise the children with one commenting: “Lovely letters from the children, it looks like their school is teaching them well….”

Susan Callaghan added: “Hope teachers, parents and carers are proud of these kids, as I am?”

While Diane Carey said: “Love it”.

Five innocent people were killed when terrorist Khalid Masood ploughed into pedestrians on London Bridge on March 22 before fatally stabbing hero PC Keith Palmer outside the gates of Westminster Palace.

On June 3, eight civilians died when terrorists Khuram Shazad Butt, Rachid Redouane and Youssef Zaghba launched a van and knife rampage on London Bridge and nearby Borough Market before being shot dead by police.