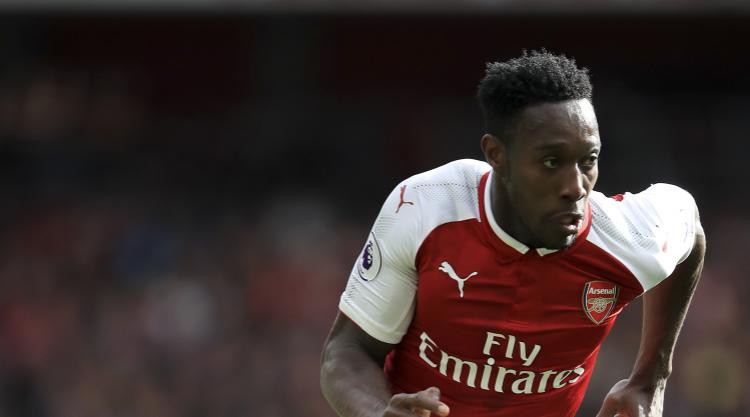 Arsene Wenger is hoping Danny Welbeck will be more relaxed in front of goal in future after the England international hit a brace to help Arsenal see off Bournemouth on Saturday.

Welbeck scored twice in the 3-0 victory and also laid on Alexandre Lacazette’s strike as the Gunners got their Premier League campaign back on track.

Heading into the game, Wenger and the Arsenal board had come in for criticism after no new signings were made in the closing days of the transfer window.

Add to that a 4-0 thrashing at Liverpool before the international break and all was not well at the Emirates Stadium despite the season still being in its infancy.

Welbeck calmed any nerves with a sixth-minute opener before sweeping home a well-taken second after a wonderful Lacazette strike had made it two.

It is the first time Welbeck has ever hit more than one goal in a Premier League game for Arsenal but Wenger wants the former Manchester United man to kick on.

“He gets stronger and stronger,” said Wenger.

“Let’s not forget that he was out for a long time. He gets stronger and stronger. He’s a team player, Danny Welbeck, and that’s why coaches love him.

“He’s a guy who has a huge physical potential. People are not convinced that he is a great finisher, but these kinds of goals will help him become more relaxed in front of goal.

“I liked his second goal today because it was the clean finish of a goalscorer.”

Wenger also played down a mixed reception for Alexis Sanchez after the Chile international’s introduction as a late replacement for Welbeck was met with a number of audible jeers.

Sanchez came close to securing a deadline-day move to Manchester City and can still walk away from Arsenal for free when his contract expires at the end of the season.

His move to the Etihad Stadium broke down when Arsenal failed in their attempt to sign Monaco’s Thomas Lemar as a replacement.

Some Arsenal fans voiced their displeasure at Sanchez’s apparent desire to leave for City but Wenger has called on the player to silence any criticism with good performances.

“We have to accept those responses from people,” he added.

“I don’t know why [there were jeers]. The best way to get people on your side is to perform.

“I had a chat with him after the game and he didn’t look unhappy. Maybe it’s because he wanted to score. The interpretation of the attitudes is always very dangerous.”

Bournemouth boss Eddie Howe had praised his side’s display in the late 2-1 defeat to Manchester City before the international break.

This, however, was different as the Englishman was left perplexed at a performance which means the Cherries have lost their opening four Premier League games of the season.

“It is very, very disappointing from our perspective,” he said.

“It was a poor performance from start to finish. I can’t hide away from that fact, we were very poor today.

“We hit the post and at 2-1 it is very much game on but not only did we not score with that moment, we conceded moments later which effectively ended the game.”