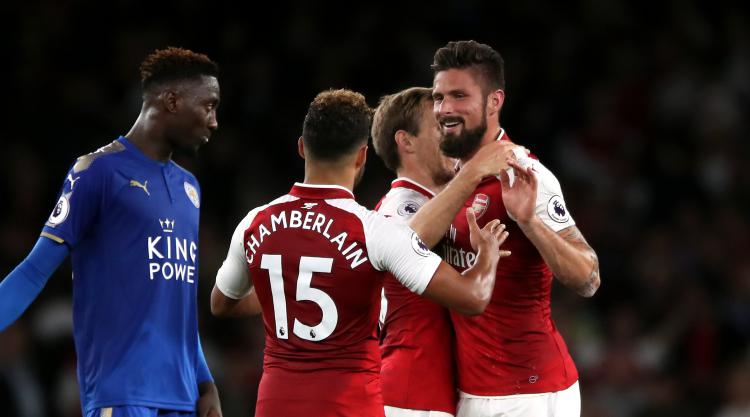 Arsene Wenger saw substitute Olivier Giroud score a late winner to see off Leicester before admitting he gave the striker a chance to leave the Emirates Stadium this summer.

The France international came off the bench to head home in the 85th minute as the Gunners kicked off the Premier League season with a thrilling 4-3 win.

Giroud’s compatriot Alexandre Lacazette marked his league debut with a goal in just 94 seconds, only for Shinji Okazaki to level for the Foxes less than three minutes later.

Jamie Vardy then struck twice, either side of a Danny Welbeck equaliser, as the 2015-16 champions looked for a first league win over Arsenal since 1983 – b ut it was not to be.

Wenger shuffled his pack and Aaron Ramsey levelled with eight minutes remaining before fellow substitute Giroud wrapped up the points.

The 30-year-old has been linked with the likes of West Ham, Everton and Marseille since the arrival of club-record signing Lacazette but Wenger is pleased the former Montpellier man has opted to stay put.

“It is fantastic,” Wenger replied when asked about Giroud’s willingness to fight for his place.

“You know, I must say I opened the door for him at some stage because I know that it’s important for him to play.

“But I don’t want him to go and in the end he decided to stay and it was one of the days of recent weeks for me because I know how important he is.

“Not only as a player, he is a fantastic player, b ut as well in the group – he has a big weight in the squad and it was a relief for me that he decided to stay.”

Pushed on whether he thought Giroud could leave before the transfer window closes on August 31, Wenger was adamant.

Having seen his Arsenal side win just one of their last seven opening fixtures, Wenger was staring at another defeat but was ultimately left satisfied with the victory.

“I feel as well that the goals we conceded, we can work together to get rid of that because one was a ball we lost in the build-up and we conceded two goals on corners.

“We were quite good last year on corners and I believe with a bit of work, we can get that out of the system.”

Leicester boss Craig Shakespeare was also pleased – even if the Foxes headed back to the East Midlands with nothing to show for their evening’s endeavour.

“You come away from home, score three goals and are nearly there and then concede two.bitterly disappointed,” he said.

“I’m always looking for the positives, we came to the Emirates and the players executed the game plan. We were a threat and played football and contributed to a thoroughly entertaining game.”

Shakespeare was true to his word and started Riyad Mahrez despite the Algeria international asking to leave the King Power Stadium.

Mahrez, who has been linked with a move to Arsenal in the past 12 months, had been a target for Roma.

The Serie A side have now said they will not increase their offer and Shakespeare is happy to have Mahrez in the team.

When asked if he expected Mahrez to stay, he said: “Who knows?

“I think we have all seen the funny business of the transfer window and we never know what is round the corner. Riyad has been very focused.

“He came out and made a statement which we are all aware of but while he trains and plays and is professional the way he is, he will be considered for selection.”