World leaders from across the globe are gathering for this year’s G20 summit in Hamburg.

US President Donald Trump will met Russian leader Vladimir Putin for the first time at the summit on Friday, with tensions over North Korea and Ukraine expected to dominate discussions.

Climate change and trade are set to also be discussed as the summit opens, with Prime Minster Theresa May and German Chancellor Angela Merkel also attending.

The meetings have been marred by a series of violent protests in the German city, with thousands of activists taking to the streets with banners reading “welcome to hell”.

More than 20 police officers were injured as protesters smashed up cars and buildings, started fires and threw bottles during the protest.

Here is everything you need to know about the G20 summit:

The G20, also known as the Group of Twenty, is an international group of governments from the world’s wealthiest nations.

While it was formed in 1999, heads of government have only met annually since 2008, with foreign and financial ministers hosting separate meetings. 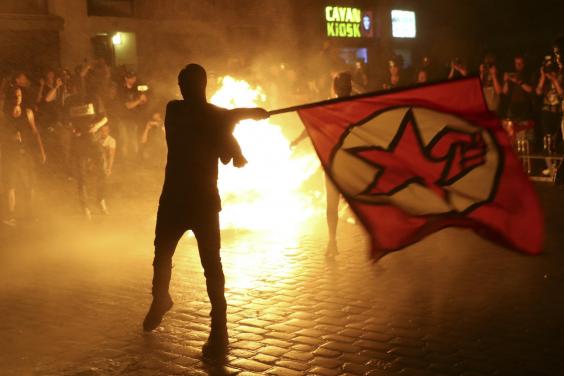 Protesters in Hamburg demonstrate against the G20 summit (REUTERS)

The group makes up about 85 per cent of the world’s GDP and roughly two-thirds of its population.

World leaders met at G20 twice a year while countries were in the midst of a financial crisis in 2009 and 2010.

It is a larger and more significant meeting than the G8, which Russia is currently suspended from over its intervention in Crimea.

Who is attending the summit?

Despite the title G20, the are in fact only 19 members who meet at the summit from both developed and developing countries – plus the EU.

The summit has been criticised in the past for its exclusivity in membership, particularly its under-representation of the African Continent.

The most significant meeting at this year’s conference is between Mr Trump and Mr Putin, with the US President having called on Russia to stop “destabilising” Ukraine in the lead up to the summit.

According to reports, the pair will meet on Friday afternoon for about an hour.

What happens and what is on the agenda?

The two-day summit is expected to be dominated by climate change and trade discussions, with America having controversially withdrawn from the international Paris accord.

Mrs May is believed to be planning to confront the US President on the issue, while Mrs Merkel has signalled the environment would be one of the key themes of the summit. 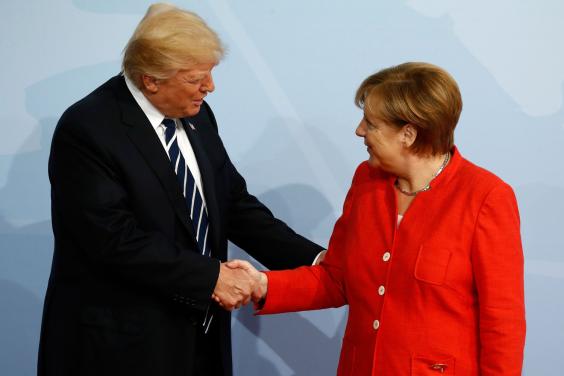 International security is also expected to be high on the agenda, with North Korea claiming this week to have launched a missile capable of striking the United States to widespread condemnation.

Mr Trump has pledged to confront North Korea for its “very, very bad behaviour” while calling on Western countries to introduce harsher sanctions.

Despite the high profile attendees, no votes will take place on legislation.

Why are there protests?

More than 70 police officers have been injured in anti-capitalist protests ahead of the summit.

The “Welcome to Hell” protest has seen scores of protesters smash up cars and buildings, while German police have used water cannons against demonstrators. 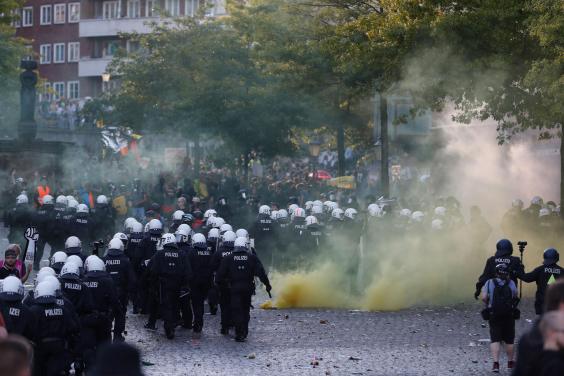 G20 demo: Riot police move in through the smoke from a smoke bomb during the “Welcome to Hell” rally (AFP/Getty Images)

Hundreds of riot police were seen wearing helmets and firing the cannons in a bid to disperse crowds.

G20 summits in the past have attracted an array of various protesters, though demonstrators are usually anti-capitalist.

Protesters are also expected to demonstrate against America’s withdrawal from the Paris accord.

In 2010, the summit in Toronto was marred by anti-capitalist riots and more than 1,000 people arrested. It was the largest mass arrest in the country’s history.