An 82-year-old woman was strangled with a dog lead in a shocking attack in her own home.

Catherine Smith was found covered in blood after being brutally assaulted by a stranger in south London.

She had been out on her mobility scooter last Thursday afternoon, walking her dog in the Palace Road Nature Gardens, near Streatham Hill.

As she returned to her home on Lydhurst Avenue about 1pm, a woman approached and asked for money.

When she went back inside the house, the woman rang the doorbell and asked if she could use the toilet.

The suspect then shoved open the front door, pushing Ms Smith to the floor and hitting her head. 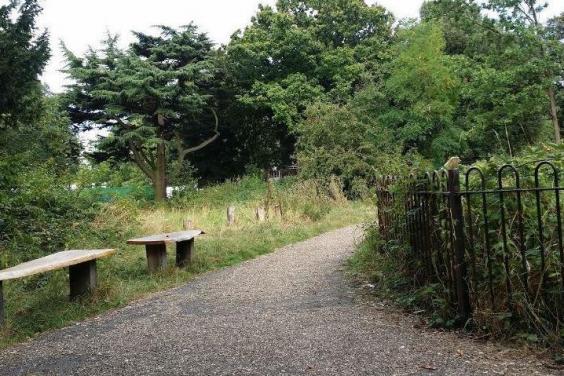 Palace Road Nature Garden, where Ms Smith was walking her dog before being attacked (Google)

Police said the suspect wrapped Ms Smith’s dog lead around her neck and began to strangle her, before running off.

Covered in blood, Ms Smith cried for help concerned passers-by came to her aid. She was taken to a west London hospital with serious injuries.

The suspect is described as a slim, white woman, about 5ft 5ins tall, with slicked-back black hair. She was wearing a khaki coloured zipped coat, multi-coloured trainers and tights.

Detective Constable Vicky Vincent, the investigating officer from Lambeth CID, said: “This was a vicious unprovoked attack on an elderly vulnerable woman’s own doorstep.

“The attack has left her very distressed.

“We believe the suspect spotted Catherine in Palace Road Nature Gardens and for unknown reasons decided to follow her home, harass her and then brutally assault her.

“We would encourage anyone with information or any witnesses to contact us as a matter of urgency so we can bring the person responsible for this heinous crime to justice.”

Anyone with information or any witnesses should contact Lambeth CID on 07785 774447, 101 or Tweet @MetCC. Information can also be reported anonymously to Crimestoppers on 0800 555 111 or online at crimestoppers-uk.org.