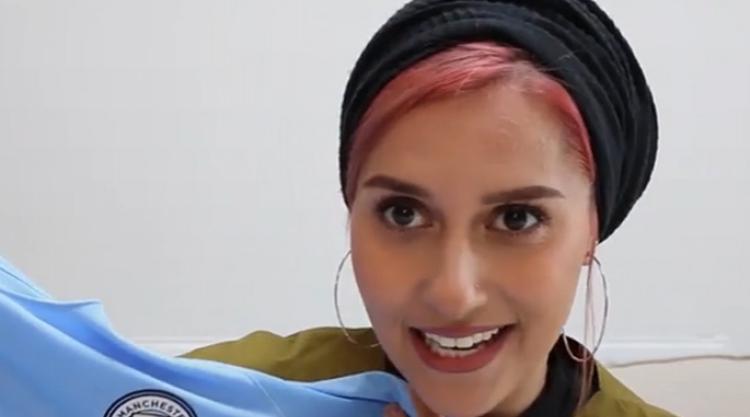 Manchester City have received a unexpected boost ahead of the new Premier League season after their kit was hailed as the most fashionable of the title contenders.

And the sartorially-sharp Cristiano Ronaldo and his Real Madrid team-mates could be forgiven for feeling sheepish when they step out at the Bernabeu after their shirt was branded the least stylish because of its “really tacky” turquoise trim.

City’s position at the top of the pile is a pt for a team managed by the effortlessly elegant Pep Guardiola.

“It c ould work very well with a nice tan, somebody with olive skin,” Dina said on the City strip.

“I would wear like light blue joggers, and then heels and big hoop earrings.

“I can imagine me wearing this out.”

City fans can afford to be extra smug in the knowledge that United’s kit was rated the worst of the Premier League challengers because of its v-neck.

“I’m not feeling that,” said Dina.

“I’m not going to lie, I don’t really like v-necks when it comes to T-shirts or kits, I prefer a crew neck.”

She did complement the “classic” red, white and black colour scheme, but it was not enough to escape a damning verdict.

“I probably wouldn’t wear that when I’m trying to be stylish,” Dina said.

Arsenal slipped out of the top four last season, but under-fire boss Arsene Wenger can take heart from the fact they are already back in it, of sorts, in second place in the fashion standings.

“These guys look like they mean business,” was Dina’s take on the Gunners shirt.

” On the sleeves you’ve got a bit of like almost greyscale from Games of Thrones, snakeskin print, which could be quite stylish. If they’d consider maybe putting that all over the shirt.

“I think I would enjoy the fit of this shirt and I think it would really work well tucked into a skirt or something.”

Arsenal will be pleased to see north London rivals Tottenham back in sixth place, with their famous cockerel logo condemned as “very GCSE textiles”.

Dina also echoed the thoughts of many angry Spurs fans in taking issue with the Arsenal-red sponsorship lettering.

“I’ m not a fan of primary colours being used together because I feel it’s very old school,” she said. “Red and a blue, I’m not a huge fan of that.”

Chelsea were awarded the third best kit because of its “strong” blue colour and “stylish” badge.

“I could layer it with a nice crisp white collar for a look,” said Dina. “I do like the Chelsea logo as well, it’s like a medallion.”

Barcelona, known for their class on the field, came next thanks to their slimming vertical stripes concentrated down the middle of the shirt.

“I magine this with, like, mum jeans tucked in, clean white trainers and then just a mac over the top, that could look pretty cool,” said Dina.

Perhaps Neymar was not convinced.

But European champions Real, unbeatable on the pitch, look anything but the part.

“I think turquoise is so tacky in clothing, unless you’re going for all one colour, head to toe,” said Dina.

“I do like the white, because white T-shirts go with anything and sometimes they can be the statement of an outfit, but normally when it’s white with black font.”